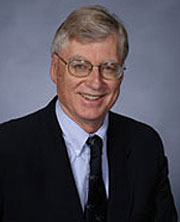 Dr. Ilo E. Leppik is an epilepsy specialist at UMP Epilepsy Care Minneapolis and Professor of Pharmacy and Neurology at the University of Minnesota.He has been practicing in the area for 40 years. He has done extensive research regarding epilepsy in the elderly funded by the NIH. This has included studying how epilepsy medicines change as one gets older. Research has also involved studying epilepsy in nursing homes.

Dr. Leppik is the past President of the American Epilepsy Society was on the Board of Directors of the Epilepsy Foundation of America and chaired its professional advisory board. He has given many lectures in the USA and internationally. Dr. Leppik’s research is widely published with over 240 peer reviewed articles and more than 250 abstracts. He has coauthored numerous books and authored Contemporary Diagnosis and Management of the Patient with Epilepsy which has 650,000 copies in print and Epilepsy: A Guide to Balance Your Life, sponsored by the American Academy of Neurology as part of their educational series for patients and families.