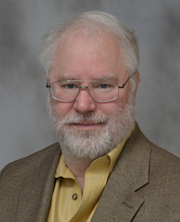 Over the years, bacteria, fungi and protozoa have increasingly developed resistance to traditional antibiotics. In particular fungi and protozoa are recognized as emerging problems; in the past 25 years the number of life threatening infections caused by these organisms due to their resistance to traditional drugs has been growing with reports that metronidazole has a 40% failure rate in treatment of giardiasis. Research on new medicines to fight these infections is a focus of our labs. In collaboration with Sid Das we are targeting enzymes in these organisms that synthesize necessary components of their cell walls. The cell wall is an attractive target since it is required by the pathogens for growth, but has no counterpart in humans and other mammals.

The simplest description of cancer is uncontrolled cell growth. In collaboration with Lee Wattenberg, Kris Pankiewicz and Dan Billadeau our lab is interested in stopping growth of tumors by causing tumor cells to differentiate or by interfering with cell signaling pathways involved with cell growth. This based on the concept that cancer cells are normal cells that are trapped in an immature (or less differentiated) state, where they lack the ability to control their own growth. We have designed and synthesized a class of molecules that causes differentiation of many types of cancer cells. This does not destroy the cancer cells, but instead causes them to mature into cells that can regulate their own growth. This approach is less toxic than conventional chemotherapy, which attempts to kill the cells completely.

In collaboration with Lou Mansky we are investigating the effect of novel combination therapy and its potential for clinical use as treatment for viral infections such as HIV and Hepatitis.

Cyanide is a well known toxin with potential as an international threat, a weapon of mass destruction and an accidental hazard through industrial exposure, medical crisis or smoke inhalation. Current treatments for cyanide poisoning are slow acting and can have serious life threatening side effects. In collaboration with Herb Nagasawa and Bob Vince we are developing a series of andidotes that use a ubiquitous enzyme that converts cyanide to a non-toxic substance. We have shown that our antidotes are more effective than the current treatments. In addition, our treatments work prophylactically. Currently we are working to expand our series of antidotes, to improve their efficacy in reversing cyanide toxicity, and to move these potential treatments into clinical trials.

Because many drug design projects involve molecules known as nucleosides, nucleotides, and carbohydrates, our group is interested in finding improved ways to make these molecules.