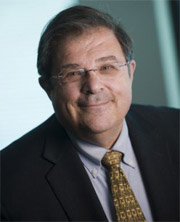 Frank Cerra, senior vice president for health sciences at the University of Minnesota, leads one of the largest and most comprehensive academic health centers in the United States. The U of M Academic Health Center, which encompasses schools of dentistry, medicine, nursing, pharmacy, public health, and veterinary medicine, as well as interdisciplinary programs in bioethics, spirituality and healing, cancer, and genomics, prepares two-thirds of the state's health professionals, supports biomedical research and industry, and receives nearly $300 million a year in government and private grant awards.

Since assuming leadership in 1996, Dr. Cerra has guided many changes to enable the AHC to respond more nimbly to the evolving health care marketplace, to advance science and technology, and to translate those advances into new treatments.

He firmly believes that the key to the AHC's vitality is being responsive to the communities it serves.

Dr. Cerra came to the University of Minnesota in 1981 as director of surgical critical care. In 1995 he was named dean of the Medical School after serving briefly as head of the Department of Surgery. An accomplished researcher as well as administrator and clinician, he is co-developer of the bioartificial liver, a device similar to a kidney dialysis machine.

A native of Buffalo, New York, Dr. Cerra received his B.A. degree in biology from the State University of New York at Binghamton and his M.D. degree from Northwestern University School of Medicine. He and his wife, Kathie Krieger Cerra, PhD, have three children.