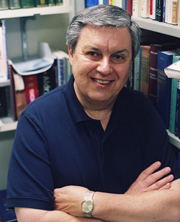 Many chemicals that cause cancer or produce other undesirable effects do so only after they are converted (bioactivated) in the body to carcinogenic or toxic metabolites. The primary emphasis of my laboratory is on the chemical and biochemical aspects of bioactivation reactions catalyzed by N-acetyltransferases. These investigations involve application of the techniques of organic chemistry, protein chemistry, enzymology and molecular biology.

N-acetyltransferases play a central role in the metabolic detoxification and bioactivation of a diverse group of drugs, carcinogens and environmentally important chemicals. Acetylation is a major metabolic pathway for hydrazines, hydrazides and arylamines. N-acetyltransferases also catalyze the conversion of carcinogenic arylhydroxylamines (ARNHOH) and arylhydroxamic acids (ArNOHCOCH3) to reactive metabolites that form covalent adducts with proteins and nucleic acids. One objective is to gain insight into differences in the substrate specificities and active site topologies of acetyltransferase isozymes by identifying critical peptide and amino acid residues and elucidating their contributions to substrate binding and catalysis. A second major objective is to identify and characterize the arylamine-protein adducts formed as a result of acetyltransferase-catalyzed bioactivation of carcinogens. The results of the research will provide a basis for understanding the functions and catalytic mechanisms of the acetyltransferases and will contribute to definitive characterization of the chemical mechanisms through which the bioactivated carcinogens form adducts with their macromolecular targets.