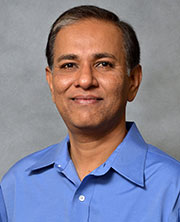 Sunil David received his M.D. and Ph.D. degrees from the Christian Medical College in Vellore, India. Following postdoctoral training stints at the Forschungszentrum, Borstel, Germany, Indian Institute of Science, Bangalore, and the University of Kansas Medical Center, he joined the faculty at KU before being recruited by the Department of Medicinal Chemistry at the University of Minnesota. His research focuses on the discovery and development of endotoxin-sequestering molecules as potential anti-sepsis agents, modulation of innate immune pathways, and host responses to infectious agents.

Mentor of The Year Award, Office for Diversity in Science Training (2010)

Teacher of The Year Award, American Association of Colleges of Pharmacy (2008)

Excellence in Teaching Award, Center for Teaching Excellence at KU (2008)

SA David & DC Morrison, "The use of synthetic polycationic amphiphilic substances with fatty-acid or hydrocarbon substituents as

"The use of synthetic polycationic amphiphilic substances with fatty-acid or hydrocarbon substituents as
nontoxic therapeutic agents in the treatment of Gram-positive septic shock," September 2004.

SA David & NM Shukla., "Toll-like receptor-7 and -8 modulatory 1H imidazoquinoline derived compounds," U.S. Patent # 8,618,128; issued May 20, 2014. Key compounds in the above patent are currently under negotiations for licensing by a vaccine specializing in vaccines.