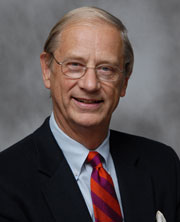 Lowell Anderson was graduated from the University of Minnesota, College of Pharmacy in 1962. He practiced at Walgreens and Northwestern Hospital, Minneapolis, and worked in the Department of Administration, State of Minnesota, prior to entering community practice. He owned and practiced at Falcon Heights Pharmacy and Bel-Aire Pharmacy, White Bear Lake, MN before leaving practice in 2006.

He has participated vigorously in both his community and his profession. He has served as a director or officer on professional, hospital, liability insurance company, health-maintenance organization and arts boards. In addition, he has served on, or chaired, community health groups, and legislative committees of inquiry.

He holds an adjunct appointment as professor in the Department of Pharmaceutical Care & Health Systems at the College of Pharmacy at the University of Minnesota.